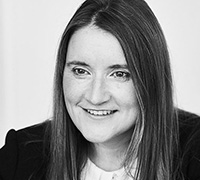 Sarah has experience in all claims for injury, illness or accident with an international element, including advising on European law issues especially concerning the EU Motor Insurance Directives and disputes over jurisdiction and applicable law. She has appeared in recent high-profile cases in the Court of Appeal and Supreme Court and is experienced in working with expert evidence of foreign law and handling claims to which foreign law applies.

Regularly acting for both claimants and defendants, Sarah balances a “commercial approach” with a “compassionate nature”.

Sarah’s public and human rights law practice, founded on her experience of constitutional human rights appeals to the Privy Council, focusses on discrimination, supply of goods and services and employment. She has appeared at all levels from employment tribunal to the Supreme Court in such cases.

Sarah has acted in several of the leading cases on religious rights discrimination, including representing Christian hoteliers who refused to supply same-sex couple with a double-bedded room due to conflict with their religious belief. She is currently appearing in Ashers v Lee concerning whether Christian owners of a bakery can lawfully be required to ice a cake with a message promoting same-sex marriage.

Sarah played hockey for Cambridge University and Richmond HC, these days is a sporting spectator, including of Blackburn Rovers and Lancashire CCC. Sarah speaks German and some French.

Sarah frequently writes and speaks on personal injury topics. She is General editor and a contributor to the APIL Guide to Accidents Abroad (LexisNexis), 2nd ed. July 2018, a comprehensive practitioners’ text on all aspects of personal injury and illness claims with an international element. She has contributed to LexisNexis online legal information service and Journal of Personal Injury Law on personal injury and conflicts topics.

Sarah regularly advises on all conflicts issues in tort and contract, especially jurisdiction in consumer and injury claims. She frequently acts in applicable law disputes including limitation, contribution claims, remedy, evidence, interest and costs. She has particular expertise in handling cases which require foreign law expert evidence and witnesses.

Sarah has acted in many of the important cases regarding direct actions for and against motor and public liability insurers across Europe and in respect of the interpretation of the EU law relating to claims on behalf of victims of uninsured or unidentified drivers where the accident is in the EU. She also litigates tort claims in non-EU accidents and advises on jurisdiction and applicable law.

She has experience of litigation in Montreal and Athens Convention claims, including clinical negligence, disability discrimination and air passenger rights issues, including flight delay compensation under Regulation 261. Sarah has handled group and illness claims, including norovirus and food poisoning.

Conflict of Laws – Wrongful Death claims – question of whether action could be brought pursuant to Fatal Accidents Act despite German applicable law – use of foreign law expert evidence.

Conflict of Laws – Assignment – Choice of Law – Rome I and Rome Convention – whether wrongful death claim validly assigned to MoD under German law.

Sarah acts in complex liability and causation disputes arising out of clinical negligence. She is regularly instructed on behalf of NHS-Resolution in a full range of claims including birth injury, surgical claims, cauda equina, brain injuries and fatal claims. She is experienced in handling multi-disciplinary expert cases. Sarah has acted successfully in claims raising issues of informed consent following the Montgomery decision.

Sarah gives training and lectures on clinical negligence issues, including on the impact of developments in the law of informed consent in clinical practice for both clinicians and legal representatives of both claimants and defendants.

Sarah has longstanding experience representing clients with religious beliefs which are in collision with the protected characteristics of others, including sexual orientation, political opinion or religious or philosophical belief in both the employment sphere and also in respect of the provision of goods and services.

She has advised clients, including religious organisations, commercial businesses and individuals with respect to their rights and obligations under the Equality Act 2010 and the Human Rights Act 1998 regarding provision of services, including services abroad, to consumers with disabilities. She has appeared in High Court judicial review proceedings concerning religious views of holders of public office.

Sarah is currently representing the Northern Ireland bakery company whose refusal to ice a message supporting same-sex marriage onto a cake is the subject of litigation before the Supreme Court (hearing in May 2018).

Sarah has substantial experience of appearing before employment tribunals in a full range of claims, including unfair dismissal, discrimination, equal pay, public interest disclosures and disability issues. She has considerable advocacy experience before tribunals, including successfully appearing before the EAT. She has conducted High Court employment litigation in injunction applications concerning breach of confidence, fiduciary duty and post-termination restrictive covenant disputes.

Sarah has appeared in many appeals to the Privy Council in both criminal and civil matters which raised constitutional matters, including recently a case concerning prosecution of a newspaper editor for the offence of scandalising the judiciary, raising important questions of freedom of expression and constitutional rights under Mauritian law. She continues to act pro bono in administrative and public law matters, including from and in the Caribbean.

Employment – Administration of Justice – Bias – Recusal – Right to fair and public hearing – tribunal use of internet to conduct own research.

Religious belief – sexual orientation – employment – ECHR – Christian registrar of births, deaths and marriages – whether she could be excused from officiating at civil partnerships ceremonies.

Sarah has a particular interest in safeguarding matters in sport. She has appeared in FA safeguarding proceedings and on behalf of the British Horseracing Authority. She represents and advises in investigations and proceedings and has written on safeguarding policies and implementation in sporting contexts. She has acted on behalf of individuals as well as sports organisations in cases of non-recent abuse and recent harassment claims, including before the National Safeguarding Panel, in the High Court and employment tribunal.

Sarah’s personal injury practice encompasses claims arising out of competitive and adventure sports, including skiing and other winter sports collisions, equine accidents and injury in competitive sports such as hockey, as well as leisure activities including hot-air ballooning, gliding, tobogganing and even ballroom dancing.

In the employment context, Sarah has represented in whistleblowing and other discrimination claims concerning sports issues and has advised on non-disclosure agreements and participation in regulatory and disciplinary proceedings.

Sarah Crowther QC is regulated by the Bar Standards Board (BSB) and holds a current practising certificate. If you are not satisfied with the service provided, please click here.

“She is involved in many of the leading cases in this area. Can always be relied upon to provide imaginative solutions to thorny issues.” Travel Law, Legal 500 2021

“She’s excellent – she knows the law extremely well, is incredibly responsive and very good with clients.” “She has an excellent legal mind and is robust yet compassionate in her handling of cases. Her expertise in jurisdictional and applicable law issues is second to none.” Travel, Chambers & Partners 2020

“She has a first-class grasp of the law and applies it effectively.” Employment, Legal 500 2020

“She is ferocious when called for and has a razor-sharp mind.” Personal Injury, Legal 500 2020

“She is very diligent and has exceptional knowledge.” Travel, Legal 500 2020

“Adopts brilliant tactics, takes a practical approach and has a lovely bedside manner which clients really like.” Travel, Chambers & Partners 2019

“She is a completely trusted pair of hands who provides good, practical solutions. She is a great advocate, who is responsive, and very sympathetic with clients.” Travel, Chambers & Partners 2019

“She has superb technical knowledge and is a very tenacious advocate.” Travel, Chambers & Partners 2019

“She is a first-class legal mind, an expert in the field of international law.” Travel, Legal 500 2019

“She has a great manner and is an unassuming advocate who secures wins that are not always the most obvious.” Personal Injury: Industrial Disease, Legal 500 2019

“She has a first-class grasp of the law and applies it effectively.” Employment, Legal 500 2019

“Sarah has a fine legal mind and is extremely capable in the areas of jurisdiction, applicable law and personal injury claims. She is one of the best senior juniors in this area.” Travel, Chambers & Partners 2018

“She is an extremely experienced heavyweight in this field. She is very passionate about the clients she represents and goes all out to get the best results from them.” Travel, Chambers & Partners 2018

“Sarah is excellent on technical points of law and is a persuasive and tenacious advocate.” Travel, Chambers & Partners 2018

“She is an excellent barrister with good judgement and client care skills.” Employment, Legal 500 2017

“She has a first-class grasp of the applicable legal principles and clearly empathises with clients.” Consumer, Legal 500 2017

“Sarah is excellent on technical points of law and is a persuasive and tenacious advocate.” Travel, Chambers & Partners 2017

“She’s extraordinarily bright, has a good bedside manner with clients and is both tough and pleasant.” Travel, Chambers & Partners 2017

“She’s a real specialist in jurisdiction and applicable law, who knows the legislation like the back of her hand.” Travel, Chambers & Partners 2017

“She picks up all the issues quickly and takes a pragmatic view on tactics.” Personal Injury, Legal 500 2016

“Very impressive advocacy skills; her questioning is precise and her cross-examination is very effective.” Employment, Legal 500 2016

“She has great experience across all first instance and appeal courts.” Consumer, Legal 500 2016

“She is practical, focused, tremendously fun to work with and someone who always appears to be one step ahead.” Travel, Chambers & Partners 2016

“She explains complex legal issues in such a way that after she’s finished you feel as if a cloud has been lifted.” Travel, Chambers & Partners 2016

“A very tenacious advocate, who is very persuasive and always thoroughly prepared.” “She can be relied upon to provide robust and commercial advice, whilst also showing a caring and compassionate nature when meeting with lay clients.” Chambers & Partners 2015

“She is a very able advocate who wins the respect of the court, clients and opponents with her straightforward, friendly and common-sense approach.” Chambers & Partners 2015

“She is great with clients and witnesses, developing a good rapport and putting them at ease.” Employment, Legal 500 2015

“She has a fine legal mind but is still approachable and down to earth.” Legal 500 2014

An interview with New Head of Chambers, Sarah Crowther QC

Advocacy training at the DIFC Academy of Law, with members of Outer Temple Chambers

Sarah Crowther QC on freedom of expression and contract law

Direct rights against insurers: what Europe ever did for us

Sarah Crowther is set to speak at the APIL International meeting